Ericsson launched the T28 in 1999, it was the lightest, smallest and most innovative mobile phone produced by Ericsson. It was also the first handset ever to use a lithium polymer battery. Based on a new technology and unique design platform, the phone’s exterior features a new arched design, which creates a series of finely balanced contours lending it all the clarity and sophistication traditionally associated with Scandinavian design.

The T28 has a minimalist look and feel, while its direct competitor, the Nokia 8210, was intended as a stylish high-end phone, it uses a forgettable bar form-factor with interchangeable covers just like many of its contemporaries.

Even today, the T28 stands out as an elegant, premium device with top-notch materials and build quality.

T28 finished in a range of distinctive colours and the most up-to-date technology including a new menu system that is easily navigated. It was a premium device — Ericsson described it as “designer technology”.

Unlike its bar-shaped competitors, the T28 was immediately recognizable by its signature antenna stub and “active flip” keypad cover.

The T28 features what’s probably the most attractive and distinguishable antenna stub of any handset, ever. It can also be removed and replaced with a new stub (if damaged) or with Ericsson’s “high performance antenna IAT-10” for stronger signal in problem reception areas.

The “active flip” covers the keypad and contains the microphone. It’s spring-loaded, and released by pressing the button on the right side of the T28 — open it to answer a call, close it to hang up.

One of the other unique design elements of the T28 is the back / chassis which is cast in some sort of magnesium alloy and provides the handset with incredible rigidity and durability.

There’s a black plastic accent all around the edges, with the majority of the phone — the front, “active flip” and keypad — finished in a handsome shade of colors: Urban Grey, Marble Beige, Slate Blue,  Mountain Heather and Metropolitan Blue.

Each battery pack clips directly onto the magnesium chassis. A spring-loaded battery release slider is located in back next to an external antenna connector (something you’re not going to find on modern devices). 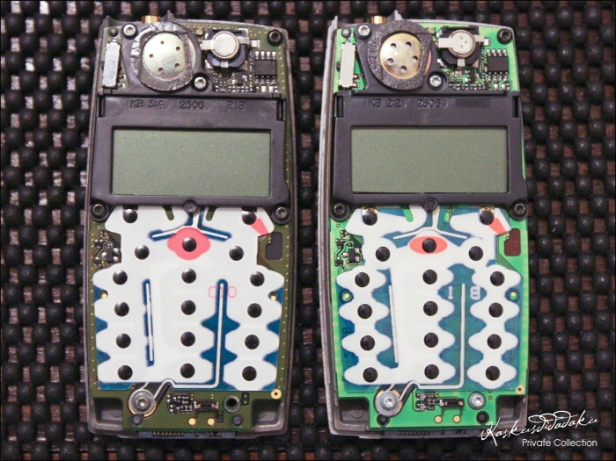 One plate is coated with vertical wires, the other with horizontal wires, forming a grid. When an electrical current is passed through a horizontal and vertical wire, the phosphorescent film at the intersection glows, creating a point of light, or pixel.

Four different versions of the T28:

Back in 1999, Ericsson knew it was creating such an iconic handset with the T28. Today it’s a device that shows the direction of the company was taking at the time, a path that continued with the T39 and culminated with the T68m → T68i right after the merger with Sony.

These devices have stood the test of time, both in terms of durability and desirability thanks to stylish, premium designs and innovative features. Sure, there are many phones from that era that can make calls and receive text messages, but few that are still functional and worth showing to other geeks. We don’t plan to give up on our modern pocketable computers anytime soon, but in a pinch or for a change of pace we’d have no qualms proudly rocking the T28.

The platform for T28 was a result of continuous product development as Ericsson Mobile Communications in Lund working with. “It is constantly a flow of ideas,” said Magnus Hjern, who was responsible for product management of GSM phones. 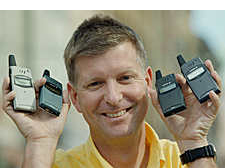 One of the heavy players in the team was undoubtedly the industrial US-born designer, Tom Waldner. He had worked with Ericsson’s new flagship in over three years.

Tom Waldner was the chief designer at Mobile Communications’ design department. He and his colleague, Richard Lindahl, were the people responsible for the T28’s appearance.

He worked from a fairly small design office at Gustav Adolfs Torg in Malmö. “I started sketching out different models, but did not think I was anywhere,” he said. One of those hopeless days in October, when he sketched out model after model without being satisfied, he went home to relax in front of the television.

Then suddenly began inspiration flow on the right fruitful way. He had no sketch paper, but well a pen and a page from a morning newspaper TV program.

“There, in front of the TV, I got out the right shape of the new mobile phone. The day after I took the newspaper page to work and made a proper sketch for it,” says Tom Waldner. He has saved the magazine page with the original sketches, he thinks it was a fun memory.

Today Ericsson displayed the all new T28 dual band mobile phone. The T28 is based on new technology and design platforms and is set to mark a watershed in the development of cellular technology. With advanced functionality, including voice control, automatic world clock and new battery technology, the T28 is one of the most fully featured phones. In combination with its futuristic new design, it marks a new departure for Ericsson.

T28 is the smallest GSM mobile phone developed by Ericsson to date. It boasts a full graphic display for easy readability and features an active flip, which lets the user start and end a call. The interior of the phone contains new functions, which will simplify efficient communications for the consumers. One of the many new features is Voice Dialling, which lets you contact someone simply by saying their name. Its keypad allows for easy and precise manipulation and a side key gives rapid access to the numerous functions of the phone.

Advanced software has been developed and utilised to ensure the user interface is faster and easier to navigate. Navigation is made simple by the use of icons, intuitive help texts and shortcuts to certain functions. Examples of some new features are the Profiles, which lets you adjust the phone to different situations. For instance you can restrict certain calls or allow certain calls to get through during a meeting or choose different ring signals and volumes, including the Vibrating Alert, for different incoming calls. The phone is developed to handle 37 languages.

Based on a new 3-volt platform the phone’s components draw less current and thereby ensure longer talk and standby times, an overall improvement in performance and a smaller phone. Batteries are made from lithium polymer, a technology that Ericsson is first to bring to the market. Talk time is estimated at up to 4.5 hours and there will be a Standby time of up to 200 hours. The technology featured in the T28 supports the complete range of GSM phase 2 – and where applicable GSM phase 2+ functions, including Extended GSM, e-GSM, the new frequencies specified by the European Radiocommunications Committee (ERC) for GSM use when additional spectrum is needed.

Ericsson has developed an all-new series of accessories to complement the T28. These accessories can best be described as “intelligent accessories” in that they provide more than the usual functions. For instance, just by placing the phone in the vehicle handsfree, the Profiles feature can automatically activate “vehicle mode”, i.e. turning on the light in the display and turning up the ring signal so it can be heard through the traffic noise. A unique feature is that when you put the phone in the desktop charger, the phone will automatically divert incoming calls to another telephone number, for instance your fixed line.

The phone’s exterior is based on a new arched design, which creates a series of finely balanced contours that lend the phone a clear simplicity. This clarity in form can be said to balance both the minimalist, and yet delicately elegant, sophistication that is traditionally associated with Scandinavian design. Finished in a range of new, distinctive colours, these carefully chosen tones tend to heighten the phone’s overall elegance and create an ambience of polished grace and sober sophistication.

The Ericsson T28 will be available in volume during mid 1999.

Ericsson unveils the smallest world phone – in the world

Today at the PCS Trade Show in New Orleans, USA, Ericsson unveiled the second in a series of its World Phones to be available after the New Year. The T28 WORLD is designed to operate on the GSM 900 and GSM 1900 bands and offers you the opportunity to use the phone in Europe, Asia/Pacific and the Americas. Measuring a mere 97x50x15mm (3.82x 1.97x .6 inches) and weighing just 83 grams (less than 3 ounces) the T28 WORLD features a full graphic display for easy readability and features an active flip with a clever release button on the side of the phone. The voice dialing feature lets you contact someone simply by saying their name, calls can also be answered or rejected by using voice only. The T28 WORLD also features the popular vibrating alert, which makes sure you don’t miss calls in noisy environments and don’t disturb others with your ring signal in more discreet situations.

Automatic time zone update is an especially useful feature when travelling globally (network dependent). The T28 automatically updates the time when the user moves from one time zone to another and functions as a world clock, alarm, calculator and stopwatch. Additionally, the T28 WORLD comes with a Global Travel Charger that allows you to charge your phone wherever you are in the world.

“Ericsson’s T28 series of phones are now truly global. We have launched the T28s for GSM 900/1800 networks, the ER 207 which is based on the T28 design and technology platform for the Japanese PDC network and now the T28 WORLD which covers five continents, over 120 countries,” says Jan Ahrenbring, Vice President Marketing and Communications at Ericsson Mobile Communications.

The T28 WORLD contains remarkable new technology supporting the complete range of GSM phase 2 – and where applicable GSM phase 2+ functions. Based on a new 3-volt platform the phone’s components are smaller and thereby effect less power consumption ensuring an overall improvement in performance. Advanced software has been developed and utilised to ensure the user interface is faster, more accurate and easier to navigate. Examples of some new features resulting from this software are the status list and profiles. The status list allows you to view available, or indeed, occupied, memory positions, stored positions and stored message types. Profiles lets you establish different profiles on your T28 WORLD e.g. you can choose different ring signals, including the vibrating alert and different ring volumes for different incoming calls.

Ericsson T28 WORLD is an exquisite example of cutting-edge technology and sensuously sculpted design. Its lines and contours have been delicately arched to give it the clear, simple, form traditionally associated with Scandinavian design. Finished in Urban Grey and Metropolitan Blue, these colours capture the stylish image of the phone.

Ericsson has developed an all-new series of accessories to compliment the T28 WORLD. These accessories can best be described as “intelligent accessories” in that they provide more than the usually functions. The Desktop Charger, for instance, offers you detailed information about the amount of charging time left before your battery is fully charged. 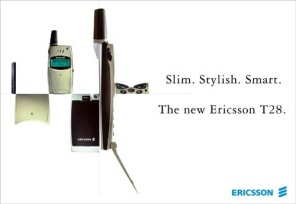