Code name: Valentina/Walentina, UMTS prototype based on Ericsson R520m form factor (test software).
Valentina is the Ericsson first UMTS proto, its UMTS-function is not completed researched due to some reasons. 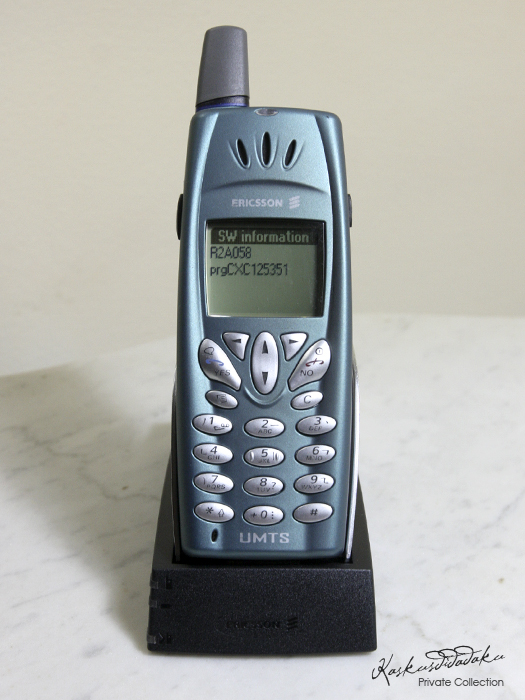 “Due to its rarity one shouldn’t expect to get a unit with operational firmware. The T29 antenna on top of the Walentina is obviously normal. All units I have seen on pictures so far are fitted with this kind of antenna. Probably the typical black R520 antenna wasn’t yet produced at that time.” (www.e-zones.net)

1G, the ﬁrst generation, is the name for the analogue or semi-analogue (analogue radio path, but digital switching) mobile networks established in the mid-1980s, such as the Nordic Mobile Telephone (NMT) system and the American Mobile Phone System (AMPS). These networks oﬀered basic services for users and the emphasis was on speech and speech-related services.

1G networks were developed with national scope only and very often the main technical requirements were agreed between the governmental telecom operator and the domestic industry without wider publication of the speciﬁcations. Due to national speciﬁcations, 1G networks were incompatible with each other and mobile communication was considered at that time to be some kind of curiosity and added value service on top of the ﬁxed networks.

The emphasis for 2G was on compatibility and international transparency; the system should be regional (e.g., European-wide) or semi-global and the users of the system should be able to access it basically anywhere within the region. From the end-user’s point of view, 2G networks oﬀered a more attractive ‘‘package’’ to buy; besides the traditional speech service these networks were able to provide some data services and more sophisticated supplementary services.

Due to the regional nature of standardization, the concept of globalization did not succeed completely and there are some 2G systems available on the market. Of these, the commercial success story is the Global System for Mobile Communications (GSM) and its adaptations: it has clearly exceeded all the expectations set, both technically and commercially.

The third generation, 3G, is expected to complete the globalization process of mobile communication. Again, there are national and regional interests involved and diﬃculties can be foreseen. Anyway, the trend is that 3G will mostly be based on GSM technical solutions for two reasons: GSM technology dominates the market and the great investments made in GSM should be utilized as much as possible. Based on this,the speciﬁcation bodies created a vision about how mobile telecommunication will develop within the next decade. Through this vision, some requirements for 3G were shortlisted as follows:

This common trend has many names depending on the speaker’s point of view; some people call the target of this development the ‘‘Mobile Information Society’’ or ‘‘Mobile IP’’, others say it is ‘‘3G All IP’’ and in some commercial contexts the name ‘‘E2E IP’’ (End-to-End IP) is used as well.

From a 3G point of view, a full-scale IP implementation is deﬁned as a single targeted phase of the 3G development path.The 3G system experiences evolution through new phases and, actually, the work aiming to establish 4G speciﬁcations has already started. Right now it may be too early to predict where the 3G evolution ends and 4G really starts. Rather, this future development can be thought of as an on going development chain where 3G will continue to introduce new ways of handling and combining all kinds of data and mobility. 4G will then emerge as a more sophisticated system concept bringing still more capacity and added value to end-users.

The uniform GSM standard in European countries has enabled globalization of mobile communications. This became evident when the Japanese 2G Paciﬁc Digital Communications (PDC) failed to spread to the Far East and the open GSM standard was adopted by major parts of the Asian markets and when its variant became one of the nationally standardized alternatives for the US Personal Communication Systemmarket too.

A common, global mobile communication system naturally creates a lot of political desires. In the case of 3G this can be seen even in the naming policy of the system. The most neutral term is ‘‘third generation’’, 3G. In diﬀerent parts of the world diﬀerent issues are emphasized and, thus, the global term 3G has regional synonyms. In Europe 3G has become UMTS (Universal Mobile Telecommunication System), following the European Telecommunications Institute (ETSI) perspective.

In Japan and the US the 3G system often carries the name IMT-2000 (International Mobile Telephony 2000). This name comes from the International Telecommunication Union (ITU) development project. In the US the CDMA 2000 (Code Division Multiple Access) is also an aspect of 3G cellular systems and represents the evolution from the IS-95 system.

The very ﬁrst version of the European-style UMTS network takes the oﬃcial name ‘‘3GPP System Release 99’’. Despite this deﬁnition, the above-mentioned names UMTS and IMT-2000 are still widely used. At the outset UMTS inherited plenty of elements and functional principles from GSM and the most considerable new development is related to the radio access part of the network.

UMTS brings into the system an advanced access technology (namely the wideband type of radio access). Wideband radio access is implemented using Wide-band Code Division Multiple Access (WCDMA) technology. WCDMA evolved from CDMA, which, as a proven technology, has been used for military purposes and cellular networks, especially in the US.